Read about the tour in The Examiner here. 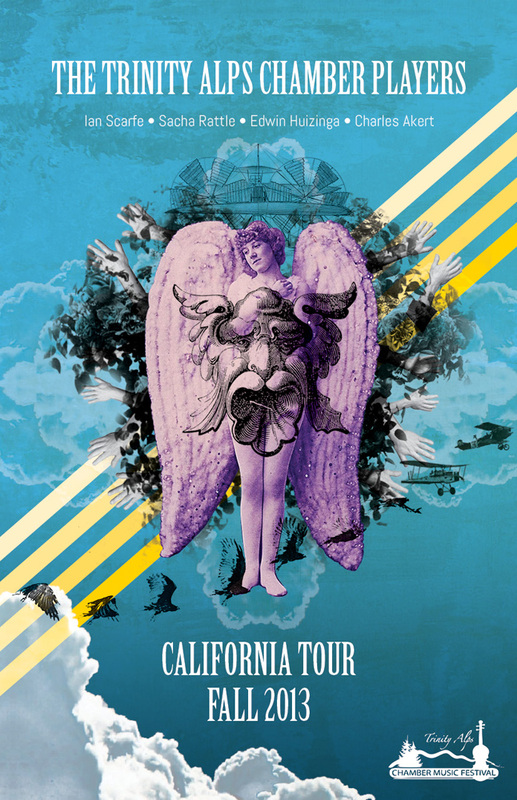 Artwork by Anna Singer
Admission to all concerts is FREE. Donations are encouraged to benefit the Trinity Alps Chamber Music Festival. For more information on private events email TrinityAlps.CMF@gmail.com.
The Trinity Alps Chamber Players features pianist Ian Scarfe, clarinetist Sacha Rattle, violinist Edwin Huizinga, and cellist Charles Akert. The ensemble was founded by the Trinity Alps Chamber Music Festival. Held in the beautiful communities of Trinity County, CA, this festival has just celebrated its third annual summer season. It has hosted over 50 professional musicians from around the world, and this summer presented 14 concerts that were free and open to the public, including family concerts featuring “Carnival of the Animals” and “Peter and the Wolf.” 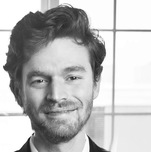 Ian Scarfe, piano
Pianist Ian Scarfe has performed as a soloist and collaborator throughout the US and Europe, including performances in Switzerland, Austria, Italy, and Portual. He is a founding member of the contemporary music group Nonsemble Six, and is the founder and director of the Trinity Alps Chamber Music Festival. Recent performances include Beethoven’s “Piano Concerto No. 4” with San Francisco’s Symphony Parnassus. He earned a Bachelor’s Degree in Piano Performance at Willamette University in Oregon, and pursued graduate and postgraduate studies at the San Francisco Conservatory of Music. He is currently a music associate at the San Francisco Conservatory of Music. 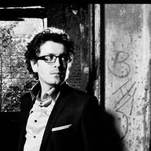 Sacha Rattle, clarinet
British clarinettist Sacha Rattle currently lives in Berlin, Germany, where his chamber music group "Berlin Counterpoint" is turning heads across Europe. Since his highly praised 2009 solo debut at Berlin’s Philharmonie, Sacha has become an established soloist, and has performed throughout Europe and Asia.  He is also a much sought-after chamber musician, having collaborated with artists such as Katia and Marielle Labèque, François Leleux, Pascal Moragues, Sir Simon Rattle and Claudio Bohorquez. Sascha received his Performance Diploma at the Oberlin Conservatory of Music, then moved to Berlin to study at Hochschule für Musik ‘Hanns Eisler’, Berlin. 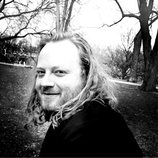 Edwin Huizinga, violin
Canadian-born violinist Edwin Huizinga is quickly establishing a reputation as one of North America’s most versatile violinists. Performing both baroque and modern repertoire, he is a founding member of the baroque ensembles Passamezzo Moderno and ACRONYM, is a member of the string trio Academy Concert Series, and regularly performs at the Carmel Bach Festival, among others. In addition to his career as a classical violinist, he is a member of the Juno-nominated indie rock band The Wooden Sky. Edwin is an avid music educator and is also currently the Artistic Director of the Big Sur Music Camp for youth in Big Sur, CA. 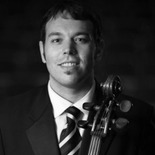 Charles Akert, cello
Alaska native Charles Akert has captivated audiences around the world as soloist, chamber musician, and member of numerous performing groups in all genres of music. He recently returned to the Bay-Area after several prestigious residencies with the Nexus String Quartet, including time spent at Kent State University and Carnegie Mellon. In 2010, he won the Grand Prize at the National Plowman Chamber Music Competition. He holds degrees from the University of Northern Colorado and the San Francisco Conservatory of Music, and has been a faculty member at the Kinhaven Music School, Blue Lake Music Festival and the Fairbanks Summer Fine Arts Festival.

“Quartet for the End of Time" by Olivier Messiaen was written in 1941, while Messiaen was a prisoner of war in a Nazi prison camp.  Messiaen, a pianist himself, wrote the piece to play with fellow prisoners, who played clarinet, violin, and cello.  The premier was given at the prison camp for an audience of Nazi guards and prisoners, to great effect.

The piece is a set of eight visions, based on texts from the Bible's Book of Revelation. Messiaen's exotic and colorful sense of harmonies makes this one of the defining works of 20th century chamber music.

The "apocalypse" is dealt with in several ways during this epic 50-minute piece.  The scenes of terror and destruction are realized with drama, for example the "Angel who announces the End of Time" and the "Dance of Fury for the seven trumpets".  However, the moments of quiet prayer show Messiaen’s intense faith and overwhelming optimism.  Each of these prayers features a different instrument - Abyss of the Birds played by the solo clarinet, and the two prayers- "...to the eternity of Jesus" and "...to the immortality of Jesus" by the cello and violin, respectively.

The dramatic background story, the energy of these young professionals, and both the dramatic and peaceful extremes of the music will guarantee that this is a memorable concert for all.