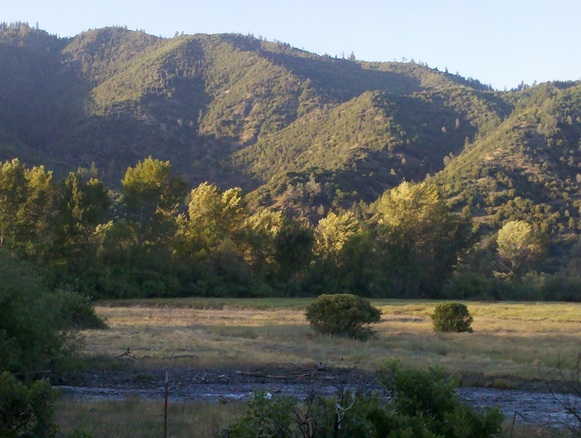 This is the view from where I sat with Ellen McGehee, a good friend from student days at Willamette University. The back yard and deck look east across Hyampom Valley - you can see their stream meandering down toward the South Fork of the Trinity River, the cottonwoods shimmering with the breeze, and the glow of sunset lighting up the valley.  We had just finished a dinner of roasted duck, raised right there on their beautiful farm, and we were enjoying refills of a delicious Pinot Noir, grown and made by the neighbors up the hill at Butter Creek Ranch.

"How could we make this better?" we asked each other.

It was the summer of 2010, and I had just finished three weeks of working and performing chamber music at the Astoria Music Festival, on the Oregon coast outside of Portland.  I was still buzzing from hearing great music, meeting dozens of brilliant musicians, and living with such a supportive community in the small town of Astoria.

Music was the answer.

"Why don't we invite a half-dozen or so of our friends up here to play music with us?  We can make it a little retreat - they get a week or two to relax and live the country life in Trinity County, we get some friends to play chamber music with!"

This is how the Trinity Alps Chamber Music Festival was born. 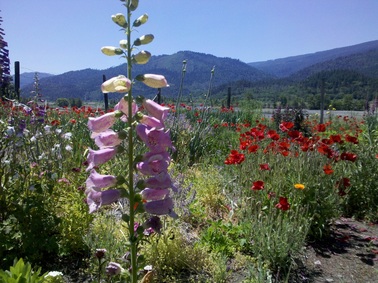 Our next thought was this:  if we are going to spend a couple weeks learning some of our favorite classical masterpieces, trios and quartets by Beethoven, Brahms, and Mozart, shouldn't be also be performing concerts around the area?  For the small community here in Hyampom?  Maybe for the "big city" of Weaverville up north?  Maybe even find some smaller venues nestled up in the mountains where folks might enjoy a bit of live music?

So the first phone call I made was to the president of the Trinity Alps Performing Arts Center - the local theater in Weaverville - Jim French.  I did not know Jim French, and I only found his name from looking on the TAPAC website, so you should understand - this first phone call felt to me like winning the lottery.

Not only did he enthusiastically invite us to perform at the TAPAC, but he asked us if we could also perform some shows for the local schools (of which he was then superintendent).  He also referred us to a half-dozen other helpful people right off the bat.  I was stunned and very excited - it is not often that your first phone call asking for help is as productive as this one! 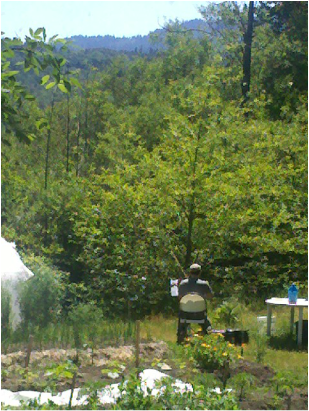 My next call was to my good friend Philip Brezina.  Aside from being a soulful musician and a superb violinist, Philip shares my love of the outdoors. It only took one camping trip in Trinity County for him to fully fall in love with this idea.

Philip and I came to Trinity twice in the spring of 2011 - once to meet with our leading supporters Jim French and co-founder Ellen McGehee, and a second time with cellist Erin Wang to present a "Spring Preview" concert in Weaverville.  We used this opportunity to announce our summer plans and introduce the community to our own special kind of classical music concert - conversations and spoken introductions about the music, engaging collaborations between two, three, four, or more musicians on stage, and exciting repertoire by classical masters as well as modern composers. 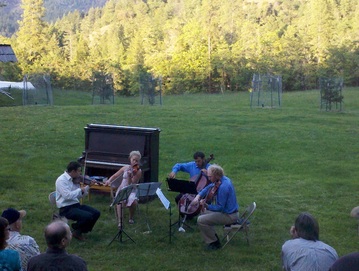 That first summer of 2011, our dreams became a reality.  We performed six public concerts for dozens of Trinity residents and visiting travelers.  We gave presentations and short concerts for Trinity county schools and summer camps.  Our first summer alone, we had 24 musicians come from all across the United States, from friends of ours fresh out of music school to established professionals like violinists Roy Malan, Daniel Rouslin, and David Salness.

Now, we invite you to join us for our coming events!  Aside from our summer festival concert series in Trinity, we are expanding to offer concerts in Redding, Eureka, the San Francisco Bay-Area, and much father afield!  Recent fund-raising concerts have been held in places as exotic as Pittsburgh, Pennsylvania, Chicago, Illinois, and we plan to journey to the wilds of Gainesville, Florida in a few weeks!

Please see our upcoming schedule, mark your calendars, pack your bags, and join the fun! 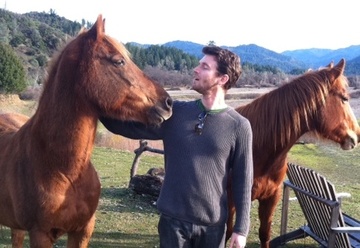